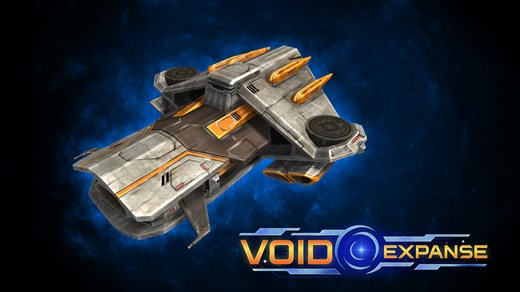 VoidExpanse scientists and engineers continue their work developing brand new combat spacecrafts. And here is another product of their relentless efforts - Stryker, the new assault frigate.

Belonging to the heavy frigates class, Stryker is a classic pattern of a "ship built around the gun". But in this case it's a powerful rocket launcher pod able to shoot any kind of missiles or torpedoes up to the Tier II variants. Due to space-demanding rocket launchers construction, the main weapon system is situated in the middle of the hull being fixed-mounted.

To provide sufficient protection as well as assault abilities there are also two universal energy/ballistic weapon hardpoints at the sides of the ship. Both have a wide rotation ark covering almost all the space around the Stryker.

This masterpiece of space ship building art designed for high speed assault against the enemy of almost any size. Side turrets can provide good reach in the combat with smaller crafts, while massive rocket launcher is able to deliver deadly punch to the large vessels at long distances.

Powerful engine and oversized main gun brought Strykers design to real lack of armor, so best tactics for this ship will be high-speed boom-zooming the enemy.

Most imporantly, thanks to Ohfive30 for his continued help!