As promised the patch is ready! And even more so, what was originally planned as a simple patch to address several rare issues and introduce some balancing changes have grown into a full blown update.

With A21 "Survivors Update" we are introducing several major improvements to the game, the biggest of which being the new "Newbie protection" mechanic as was requested by a lot of players. When you first start the game you are still learning the basics and it isn't exactly productive if you are being killed by more advanced players or players who have previous experience in the game. And this is exactly where this new protection comes into play. You will be completely safe from losing any of your items or learning points (LP) for the first four hours of the game! With that you can finish all basic quests without rushing and finish your first base to be completely secure.

Second biggest feature is the new damage tracking. The usual respawn menu has now been expanded to include a list of all recent damage sources — such as creatures, players, harmful items and status effect (including names of players who have damaged you, even if you were offline). Now now you can finally take revenge on that bad guy who killed you while you were offline :)

Next major change is the introduction of light and visibility system at night. Now all health bars and nicknames will be hidden by default if the player or a creature is in complete darkness. You will be able to see them either only when you approach or if you are holding a light source. In fact, whether or not you see something now entirely depends on the light radius of any light source, including the light from other characters and world objects!

Another improvement have been made to deposit claiming and contesting mechanic. Notification about the newly spawned Oil/Li deposit and its coordinates will be displayed to players who have Xenogeology tech unlocked. And now they cannot be claimed earlier than 30 minutes after spawning, so all of the interested players can now contest this resource.

Many improvements have been made to PvP balance. Biggest change being - any PvP damage have been reduced by half, which means that any fights between players will be twice as long now. It doesn't affect weapon or armor balance in any way, as this change is applied at the last moment after all other calculations. Oh, and also there is no friendly fire now, so you don't have to worry about damaging your friends in a heated fight. 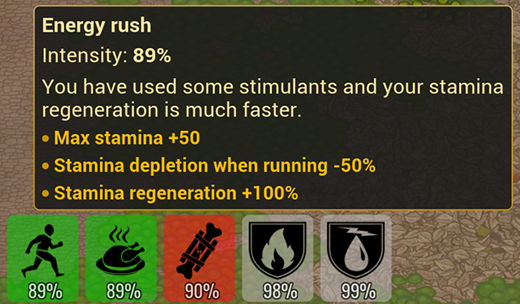 And the last and our favorite change - character status effects (such as bleeding or radiation) now include a detailed tooltip with all of their properties and effects. Just hover your mouse over any of the effects and you will see all of their detailed stats.

On the modding side of things - server rates have now exposed in a separate config file with 16 rates available for customization. You can quickly change things like LP gain rate, increase item drops, reduce player to player damage to zero or even increase the damage from creatures and make it really tough for the players!

Obviously, this is just scratching the surface and the actual patch notes include almost a hundred other changes in total. As always, you can find a detailed list of changes on the forums.

Oh, and you've probably noticed in the title for this update - CryoFall now has Steam Trading Cards!

Please let us know what you think about this update and give the game another try if you haven't played recently! Oh, and no wipe this time! We were able to make all of these changes compatible with the existing saves :)

The next big update together with the wipe is still planned for May and it will finally introduce PvE game mode on separate servers and many other changes and new content! Stay tuned! There's a lot to come in the following months. We are here for the long haul to make CryoFall the best game it can be! :)